the latest statistics of Colorado Association of Realtors echo much of the data from the Denver Metro Association of Realtors, which recently released all-time highs for detached single-family homes, measured by both average and median prices. But many of the real estate agents cited in April’s CAR report offer at least a glimmer of hope for potential buyers, even as they acknowledge that many people are giving up, at least temporarily, on what remains a seller’s market.

According to Aurora-area real estate agent Sunny Banka, “We are seeing more price reductions on some homes and in some areas. …Buyers should note that while the market is still hot, they have a better opportunity to get the home they are looking for.” But Barb Ecker says that in the Jefferson/Golden County area where she specializes, “the market hit a bit of a wall in the last two weeks of April. Buyers may need to lower their price range to stay in the market because they simply can’t afford the home they were eyeing just a few weeks ago.

CAR’s April numbers show prices for Colorado as a whole aren’t much lower than metro Denver. The statewide median price for a single-family home landed at $600,000, compared to $660,000 in the seven-county metro area. The median price difference for townhouses was even smaller: $440,000 for Colorado and $445,000 for the metro area.

Watch below to see month-over-month and year-over-year changes in the Denver Seven Counties area in April for new listings, sold listings, selling prices and more. Again.

And here’s a chart detailing the rise in median prices for single-family homes and townhouses in the Denver metro area: 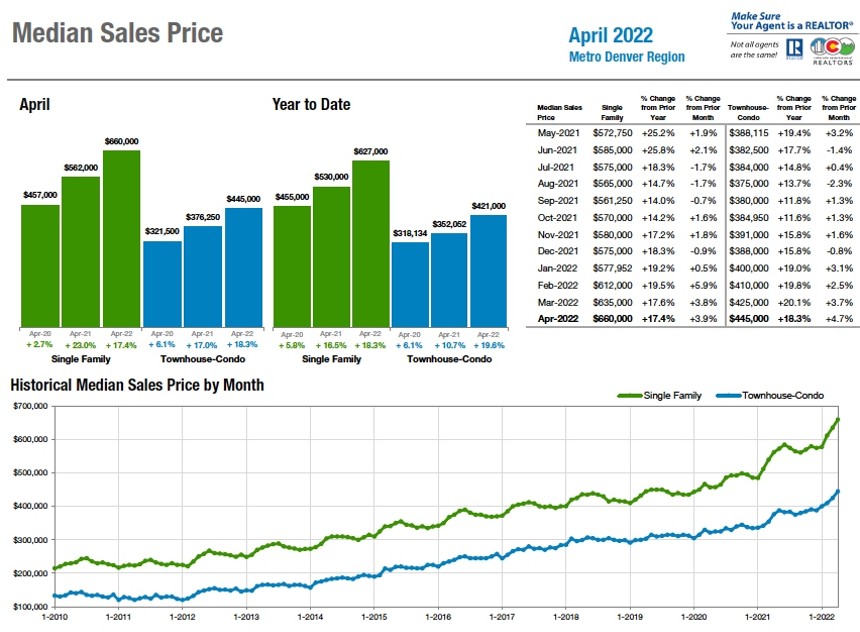 “Buyers need to be proactive in an environment where inventories are still low,” adds Banka. “That said, sellers should be prepared not to have twenty offers in the first three days and their prices may need to be adjusted. Buyers may find a little less competition in the market but should still be aggressive in their research and prices to find the house of their dreams.”

Kelly Moye, a real estate agent with expertise in Boulder and Broomfield, has seen a drop in demand. “We’ve reported over the past eighteen months a market where listings sell out within days for more than 15-20% of the list price, with five to 10 deals as the standard and typical event,” she says. “With extremely low inventories and strong demand still dominating our market, it seemed like the end was nowhere in sight.” But after interest rates rose, she continued, “buyers’ purchasing power was dramatically reduced, and that’s the day the market changed. weekend instead of twenty to thirty, and suddenly the houses were still on the market on Monday morning. Sellers expecting a flurry of activity were deeply disappointed, and we started to see price reductions trickle down to our morning email alerts.

Thanks to “a half-month supply of stock, sellers are still enjoying a strong market,” she says. “But as the pool of buyers dwindles due to rising rates and falling purchasing power, the change we’ve all been waiting for has finally arrived. They say you only know when the downturn hits. right after it happened. It appears to have happened a few weeks ago, and with more rate hikes on the horizon, we expect a very different second half than 2021.”

Matthew Leprino’s assessment of Denver County’s situation is less definitive. “Each month for the last eight months, the year-over-year median price increase has increased further – but much less than the year before, and less than half in some cases,” he says. “Between April 2022 and 2021, the median price of a single-family home in Denver increased 16.3%, compared to 21.5% the previous year. February went from a 21.9% growth to a 11.7% year over year, and with all but two of the past twelve months the rise has come down. It’s not that prices aren’t going up. They are, but not as fast as they were.

Still, he cautions, “we need to be cautious at this point. … We have no indicators that prices will fall or regress for the foreseeable future. They may, and we can hope, simply reach ground flat and hang around just a moment – until we fill up the tank.”

Click to read the Colorado Association of Realtors Housing Market Report for April 2022.

However, before getting into this report, I need to explain why so many people missed out on this surge in demand in the second half of 2021. It’s the same reason I’ve given for many years: American bears hosting generally addicts can I do not read the data correctly, and the mortgage purchase application data […]

Image source: Getty Images Will house prices start to become more affordable? That’s the question many potential buyers ask, and recent data from the National Association of Realtors (NAR) may shed some light on the matter. NAR reports that while the median existing home price rose to $416,000, the percentage increase was down from the […]

Don’t bother trying to nab one of these East Tennessee mansions for sale on the market. Most trade is done strictly by word of mouth. Knoxville, Tenn. – Knoxville isn’t the first place that comes to mind when you think of fabulous homes in a “Town & Country” setting. East Tennessee’s affordability, growing local wealth, […]